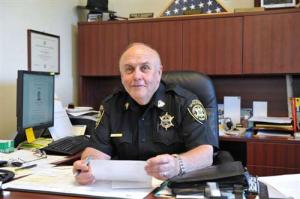 Charles Town, West Virginia – Arrests alone are not enough to curb the substance abuse crisis in the Eastern Panhandle, says Jefferson County Sheriff Peter Dougherty. On Saturday, August 29, Dougherty addressed a roundtable convened in Charles Town by the Eastern Panhandle Young Democrats to discuss the rising number of heroin overdoses and drug-related crime in the region.

During Fiscal Year 2015 (July 1, 2014 to June 30, 2015) the Jefferson County Sheriff’s Department received over 13,000 calls for service, an increase of 12.5% from the previous year, in spite of population remaining stable. Dougherty estimates that at least 2/3 of property crimes (thefts, larceny and burglary crimes) are related to person(s) who are drug addicted. While drug use is addressed by law enforcement arresting those committing crimes (Jefferson County saw a 19% increase in felony and misdemeanor arrests in FY 2015) Dougherty sees promise in professional interventions such as the Jefferson County Day Report Center and peer-based addiction recovery programs such as Oxford House as alternatives ways to break the cycle of addiction.

“We are not going to arrest our way out of this problem,” said Dougherty, noting the importance of addiction treatment programs and lack of available rehabilitation services in the Panhandle. “We live in an area where many times an individual addicted to drugs that wants to get off is told they have to wait six month to get into a treatment program. That delay is often overwhelming and lessens the chances of a change.”

The Eastern Panhandle Young Democrats hope Saturday’s roundtable will be the first in a series of conversations that go beyond alarming statistics and get to the root of the substance abuse problem. Participants also discussed health education in schools, limitations in existing mental health and addiction treatment centers, and community-based heath initiatives such as the Drug Free Community grant being pursued by concerned citizens and the Jefferson County Dept. of Health.